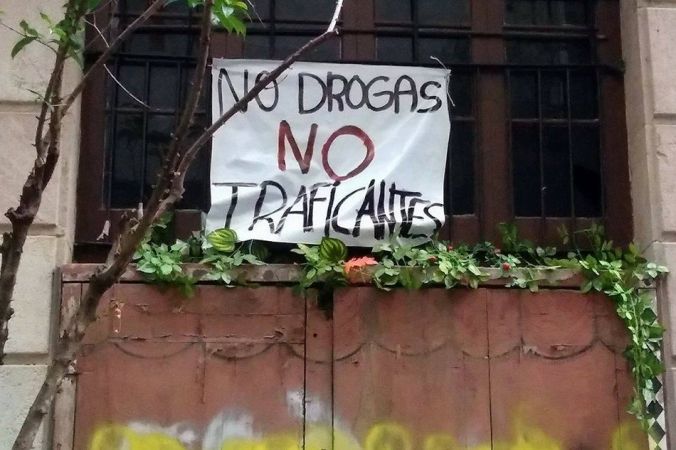 Residents of Barcelona put up a sign on their opposition to the presence of drug traffickers in their area. Photo by Daniel Infante Tuaño

BARCELONA – The increasing number of apartments being used to sell drugs is one of the growing concerns in the neighborhood of Raval, home to many immigrants in Barcelona, including Filipinos.

Sixty apartments were identified as alleged drug dens in the area, said Carlos, one of the community leaders from the street, Carrer d’En Roig.

In one of the buildings where there are ‘narco-apartments’, the number of individuals going in and out reportedly carrying out illicit transactions can reach up to 200 in a day.

‘Narco-apartments’, according to Carlos, were the result of Spain’s real estate and economic crisis that displaced families who couldn’t afford to pay rent or mortgage leaving apartments empty.

Some of these empty apartments are now illegally occupied by drug traffickers.

“Human excrement, used syringes, street brawls with weapons, threats, busted portals, and mattresses in communal spaces are an everyday fare,” reads a statement in Spanish from neighborhood associations who are no longer taking things into sitting.

Every night, armed with pots and megaphones, they stage a noise barrage to shame those who are in ‘narco-apartments’ and voice out their grievance against the local government’s inadequate response.

Recently, hundreds of Raval residents including Filipinos marched around the neighbourhood and stopped outside every building reported to be drug dens.

(We stop by the buildings where drug trafficking happens… We see so many of them now in our area.)

(They’ve become brazen. It’s worse now, they do it in the open. It’s like they don’t care anymore if somebody sees them.)

(We live here so we need to protect our youth and family from drugs.)

The rains couldn't dampen the spirits of concerned residents of the Barcelona neighborhood of Raval. They protested against the proliferation of drug-trafficking and real estate speculation. #raval #fueratraficantes #pisosturisticos #barcelona #drugmenace #barridigne #barriodigno

Despite the problems present in the neighborhood, ironically, living there is becoming more and more expensive as some apartments are being rented only to tourists. Owners find it more lucrative to have their apartments rented to tourists than to local residents leading to exorbitant rental fees.

“We are asking that the administration to pay attention a bit of what is happening in Raval because it is abandoned, it is much neglected. This situation also gives way to real estate companies, the banks to speculate, boot out the people who have been living here all their lives and resell their apartment or rent their apartments at a much higher price,” said Alba Tor, speaker of the neighborhood association of street of Sant Gil, in Spanish.

The neighborhood associations called on the local police and the local government to speed up eviction of “narco-apartments”, rent empty apartments for social housing, and further control the tourism excesses in the area.

However, the city government of Barcelona explained that in order to evict the occupants of the apartments, the complaint should be coming from the owners. Identifying the owners could take time as some of them are investment funds with business addresses in other countries.

“In July we started with an action plan that involves, on the one hand, a more intensive intervention in the public space to improve small aspects of public space…On the other hand, we have assigned a team to contact the owners of empty apartments,” said Gala Pin, Councillor of Ciutat Vella district, in Spanish in an exclusive interview with ABS-CBN.

Gala added that more police have been deployed in the area, the maintenance and cleanliness have been improved, and there are health professionals who collect used syringes and report drug users to the authorities. Specialized centers for drug dependents have also extended their opening hours to accommodate drug users. Originally published on news.abs-cbn.com